During my post high school, Community College days, I was fairly active, playing the drums, going to school, heading up the college radio, station, coaching my high school crew team and working whatever jobs I could find to keep my 1969 Mustang and my motorcycle going and put some spending money in my pocket. I always loved seeing live music. Being a musician of sorts and a bit of an aficionado and being friends with many local musicians, I loved going out to see bands play. Other than that, I didn’t have much use for bars. Some of my friends would drag me out once in a while, to a dance club, to attempt to pick up women, but I hated that whole scene and vibe. Too phony. Not real. Not for me.

The only non-music bar I ever loved was a little dive called The Pickwick Pub.

One of my favorite things to do on a weeknight, was meet one of my best friends in life, Lee, at her job, and wait for her to get out of work so we could go hang out at this old, dingy little bar on Main Street in Poughkeepsie- our own personal “Cheers” for two – The Pickwick.

There we would sit alone at the dark, mostly quiet bar, with the usual exception of a few older men at the other end. We would sit and talk and watch David Letterman on their little tv- this was long before every bar in the world had a half dozen 64 inch flat screens. We would watch this tiny tv on the back wall of the dimly lit bar, and we’d drink. Jack and Coke. Never, ever anything else. I’m pretty sure we killed our share of bottles back then. I’m also pretty sure neither one of us were of the legal drinking age, which incidentally was constantly being raised just before I reached it. At 17 it was 18. At 18 it turned to 19. At 19 it turned to 21. Always just before I made the cut. Those were different times, though. I had been going to bars since I was 15 (Sorry mom), when my brother’s friends took me to see Twisted Sister at a small local club. That story is for another day. I never really drank a lot. It was mostly to see bands, but at that time, The Pickwick was my drinking bar.

Normally, with my other friends, a night out always culminated with a trip to the now defunct Pleasant Valley Diner, but on Pickwick nights, when Letterman was finally over, we would pay our tab and make the short drive to Lee’s house, where I would cook us up some eggs or omelettes, depending on what we could pillage from her parents fridge. I still don’t know if her dad knows who I am- other than ‘that guy who used to make breakfast in his house at two in the morning.’

Fast forward some thirty years or so- after the crazy series of events in my life, I’m working at a 128 year old family owned hardware/contractor supply store, Davies Hardware, just a few blocks from The Pickwick. One day, this attractive, vivacious woman comes into the store. Now, we mainly deal with contractors and rental owners and older folks who have been shopping there for years. When a pretty lady enters the store, there aren’t any fist fights to get to her, but there can be some competition. Fortunately, I made my way over to her first. She asked if we had any pallets that we were getting rid of. We got to talking and she told me her name was Jackie and she was making furniture out of the pallets. I knew that pallet projects were all the rage lately, but as we spoke, I discovered that she’s one of the recent owners of the Pickwick Pub and the furniture was for the outdoor area. The Pickwick Pub?   My Pickwick Pub? I hadn’t heard that name in years. I told her how I had spent many nights there, with my friend, consuming Jack Daniels and watching Letterman. I helped her load up some pallets and she told me to stop by sometime and she’d buy me a drink. 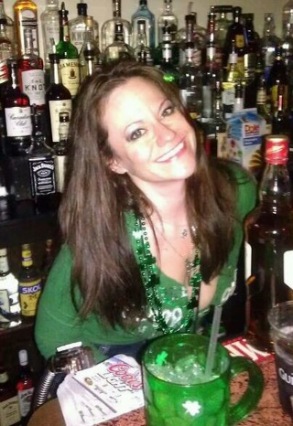 I still don’t really do bars all that often anymore, except for live music, which I didn’t even realize happened at the Pickwick. I didn’t collect on my free drink, but I did see Jackie several more times at work. Every time she’d stop in for various items for the bar. It always brightened my day- and I was certain she had the same effect on her customers. She was always smiling- even when I was sure she was a bit stressed. We spoke briefly a few times, via electronic technology- like the time I had to ask her if she thought my 30 year old bottle of Jack Daniels was still drinkable.
Finally, one night before Christmas, I would make a visit to my old friend, the Pickwick. Jackie was in earlier that day, looking for some stick-on Christmas light clips to decorate the bar. She bought all we had and I told her I’d bring her some more when we got them in. After checking our inventory, I sent her a message saying that we may have some in the back room and I’d bring them by. Unfortunately, I couldn’t find them. Later that night, I felt bad, so I went out and bought a few packs and brought them to the Pub.

Walking in the place, it took a minute, but the memories rushed in. It had changed, but it hadn’t changed. Still familiar. Different, but still the same. I gave Jackie the clips and she ‘made me’ do a shot with her. Then, I sat at the bar with my usual drink for a little while, before taking a stroll around the place and returning home.

It must have been about two months later when somebody told me  the horrible news. The Pickwick was being torn down to make room for a pharmacy drive through. A pharmacy drive through? They’re going to tear down an historic building because we need another drugstore in Poughkeepsie? Another drive through? The very definition of the thing states the fact that the consumer has a freaking car. Can’t they drive a quarter of a mile in either direction to the next drug store? I immediately sent Jackie a four word message- “Are the rumors true?”

I saw her shortly after that and got the details. April 23, 2016 would be the final day for the Pickwick Pub. I knew I had to get there soon. I sent a text to Lee that night and we made plans to return. It wasn’t long, before we were sitting side by side again, at the same bar we used to frequent 32 years ago, drinking Jack and Coke. It was always Jack and Coke. Our last drinks killed what I was sure was the last bottle of Jack Daniels I would ever finish off there. To continue the tradition, afterwards, rather than invading her parents house, we drove to a diner for some breakfast.

If the story ended here, it would have been perfect enough, but somehow, it was going to get even better…

Shortly after my last visit to the Pub, a Facebook post appeared listing the Pickwick’s final band schedule. The final show was SATO- a band that usually headlines much, much larger venues, and whose members I’ve known for many years. I knew I had to be there. I also knew it was going to be chaotic.

The fateful night finally came and my plans were falling through. Suddenly, I had nobody to go with. I didn’t want to go alone, but I was not going to miss it. In a last minute effort, I texted my old friend, Ray, and asked if he wanted to go. I caught him just before he got started on a painting project and thankfully, he welcomed the distraction. When we walked into the bar, it was fairly crowded. We got a couple of drinks- yes, Jack and Coke- and went outside to the backyard area, to get away from the crowd. The back was pretty packed and it was early yet. I knew this was going to be a crazy night. I quickly spotted Frankie, the band’s bass player and we went down the steps to say hello. Frank is a great bass player and a pretty amusing character. I don’t think I’ve ever seen him have a bad time. Ever. He was pretty psyched to play. Soon after, I said hi to Jimmi, the drummer, and back inside, Paul, the guitar player was setting up. I talked to him for a few minutes and then Ray and I parked ourselves in a great spot and enjoyed the show.

Surprisingly, for such a small venue, the band sounded pretty damn good. They were crammed into ‘the music room’ with the bare essentials. 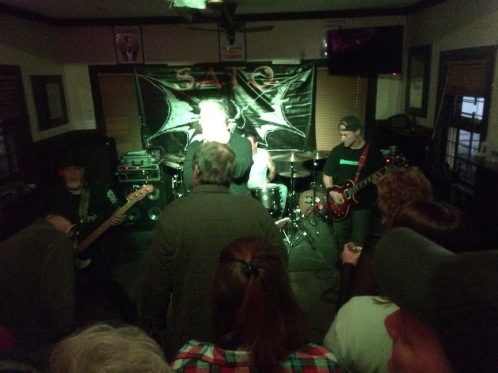 The crowd was completely into it. I had never seen a band at The Pickwick before, but I found myself wishing I had. We proceeded to have a great time and even made some new friends. In between sets, there were a couple of emotional speeches and Jackie’s friends presented her with some gifts, but the highlight of the evening for me, was when I went to the bar for one last drink. My last drink ever at The Pickwick. The bar was still slammed. The bartenders were all running around like crazy. I waited patiently…for Jackie. I gazed one last time at my surroundings, taking a picture with my mind. Jackie was greatly supported by her friends and her Pickwick family that night. I finally got her attention and told her I wanted her to make my last drink at The Pickwick for me. For one final time I said, “Jack and Coke please.” She reached for the big bottle of Jack Daniels and emptied it into my glass. She put the cap back on, looked me in the eyes and reached out and with her usual great big, warm smile said,”Here. Take it home. Souvenir.”

I wasn’t a part of Jackie’s Pickwick family of regulars, but all of us there that night were connected by a common bond- by a building…an inanimate object that was full of life and provided a place for people to escape from the world. A place for friends to gather. A place for strangers to meet. A place for life to begin again while the daily struggles were put on hold. The Pickwick people will find a new place. Jackie will surely bring her smiling face and bubbly personality back to the world and The Pickwick Pub will live on in the hearts and minds of all who entered her doors, long after the walls come down…and I will have a great big empty bottle of Jack Daniels on my shelf, forever reminding me that time goes by and life goes on and memories really do last a lifetime. 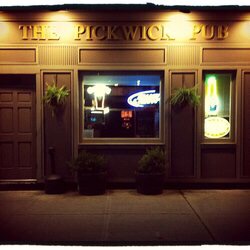 6 thoughts on “The Pickwick Pub”