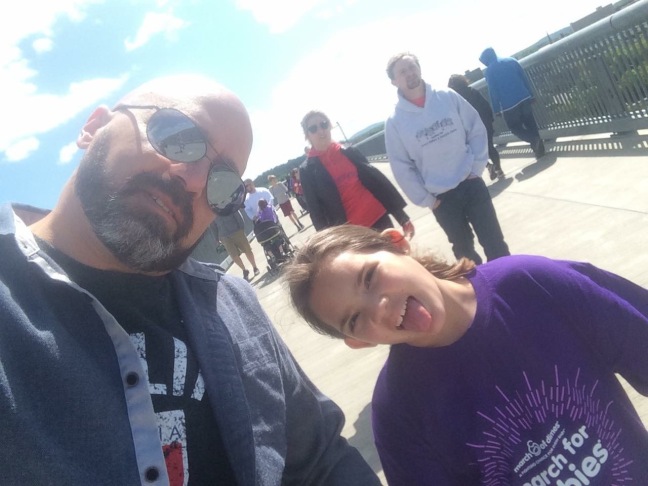 I’ve always hated math. I’m not really sure why. Maybe it’s just the way my brain is wired. I was never great at it. I wasn’t terrible, but it just didn’t come easy to me. Sometimes, it didn’t come at all. Honestly, I even dislike doing math homework with my kids. Dislike? Understatement. I hate it. My kids don’t get it. It’s confusing. It’s 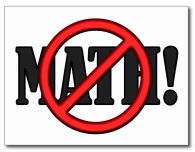 frustrating. It’s…math, but I do love numbers. I like watching sports scores and stats, and their effects throughout a game. I like counting money. I like speedometers and I like how temperature affects the weather. So, in conclusion, numbers- yes, math- no.

In a recent, fairly last minute decision, I spoke to my daughter and we decided to do the annual March of Dimes, March for Babies. If there’s one thing Maria loves, it’s babies. Honestly, she loves a lot of things- literally, almost everything, but babies are even a step above puppies- and she loves puppies. The March for Babies was being organized by my amazing friend, Lynne. She had experienced difficulties with the birth of all three of her children. All three were born prematurely and she had very difficult pregnancies. What makes things really hit home for me, is that Lynne lost her first child due to a premature birth. His name was Vincent. Vincent James. My younger son was born just several months before him. My son’s name is Vincent Joseph. They would both be fourteen today. We didn’t know each other way back then, but there was an extraordinary connection when we finally did meet.

Lynne is not the kind of person to sit around and complain. She likes to make a difference. She is the Community Outreach Director for not one, but two of the local chapters of the March of Dimes and she has headed up the March for Babies (along with many other events) for the past several years. I wasn’t sure if I was going to be able to attend, but when I talked to Maria about it, there was no way I would be allowed to miss it. Now, if I was going to go to this event, I wasn’t going to show up empty handed. I’ve organized, participated and volunteered in my share of charity fundraisers over the years. I know the importance of raising money and awareness for a cause. I also know how difficult it can be to get people to part with their hard earned cash, especially when there are so many worthy (and trendy) charities out there today. Maria and I made a decision that we were going to help, so we came up with a plan. We would post a sad, pouting picture of her, on Facebook every day until we reached our goal- Unfortunately, our plan was flawed, as were my calculations. I didn’t realize how generous my Facebook family and friends were going to be.

I created our online fundraising account on the March of Dimes website and set our goal. $500. I did the math- one, two, three, four, five, six days, $100 a day, and we’d beat our goal. That’s a pretty good amount to raise in less than a week. Maria made her best pouty face and I wrote up a caption explaining that she wants to help ‘save the babies’ and she will not smile until we reach our goal. I posted the picture with a few words explaining out diabolical plan. I added a link to our page and we were all set. Now I just hoped we would at least raise some money. Well, out first goal lasted for about two days. We quickly surpassed $500- plus we were in the top ten for all of the online fundraisers- a mathematical statistic that I did not even know they kept track of. I painstakingly did a little more math in my head and raised our online goal to $1,000. I thought that was pretty crazy. Like I said, I’ve done my share of fundraisers over the years, including a charity bike ride which I ran and organized for almost ten years, but I’ve never raised $1,000 myself, in personal pledges. I posted another picture and caption and in just two more days, we passed our new goal. By a bunch. Not only that, but we became the number one online fundraisers- in just three and a half days. My mathematical calculations had failed me. Not only was I humbled by the donations from friends who have little or no money to spare,  but I had no idea we’d get such generous individual donations of 50, 100, 150 and as much as 250 dollars! I figured I’d better set our new goal at something we couldn’t possibly reach: $2000. Yes, I did the math…again. 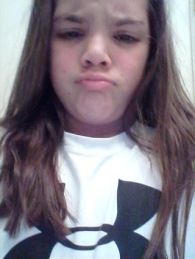 We had less than two days left. I posted another sad picture and a plea to my Facebook family and friends that would have made Sara McLachlan proud.

Checking the M of D website became an addiction. Watching us bounce from the number one spot, to number two, then three…then back to two. Now I had a new goal…We are going to finish at the the top spot. The number one online fundraiser. Not for my own ego, but to show my support for my friend and to give my daughter something to be proud of. OK…maybe a tiny bit of ego and competitiveness came into play, but Maria doesn’t participate in any sports. She doesn’t excel in school. She doesn’t have a lot of friends. She loves babies though, and she loves to help people. I gave her updates throughout the days. I made some phone calls and sent out some texts, along with a final Facebook post and picture. Finally, late on Saturday night, we were at the number one spot again with over $1600. Maria was more than thrilled. She was so excited about the March, she could barely sleep. Sunday morning came, and she was more than ready for the event. The first thing I did was check our webpage. Damn! We got knocked back down to second. I didn’t have the heart to tell her. We were almost 200 dollars behind first. Just 200 lousy dollars! We had about two and a half hours. My brain started cranking out numbers. That’s just $40 per half hour…or something like that. I think. I don’t know. I quickly put up one last Facebook plea, stating that we were shy of our goal and there was still time to donate. When Maria asked how much money we raised, I sadly replied, “about $1700, but we’re not in first place anymore.” That’s when my eleven year old special needs daughter straightened my ass out.

After a few minutes of feeling like a horrible parent, as well as a lousy mathelete, we got our things together and headed to the Walkway Over The Hudson. The parking lot was packed and the streets were lined with cars, so I made the executive decision to start a new row of parking in the big lot. I scootched the Outback into a makeshift spot, behind a big SUV. Several cars started filing in next to me, so I figured we were OK. The event looked great. Tents everywhere. Music blasting. The place was buzzing with excitement.There were teams of people with matching t-shirts with names and dates. Dates of when they lost their “angel babies” to complications resulting to premature births. It was truly heartbreaking and motivating. We walked over to the registration tent and I gave my name to the guy at the table. He said, “Mike Berretta…. $760?”
I said “What?”

I pulled out my iPhone (unsolicited endorsement?) and reloaded the website and handed it to him, and said “I think it should be 1790.”

Yup… $1790. But still second place. My little girl was right. It wasn’t about ‘winning’ it was about helping people and saving babies. I was being a typical, over-competitive, mathematically challenged oaf and had to come to terms with second place and not reaching our goal.

At the start of the walk, Lynne introduced the guests of honor, including the Mayor of Poughkeepsie, our County Executive and our Senator. She then gave an emotional speech which made me glad I was wearing my dark aviator glasses, because at that same exact time, I believe the sun was in direct alignment with my corneas and caused some sort of eye watering reaction. As 2,000 of us began walking, I realized that my wonderful daughter had apparently taken off her sweatshirt and left it somewhere. Yes, the same sweatshirt that I told her to put on about 27 times throughout the day. It was a brisk morning, but her body is like a little oven and she toughed it out. 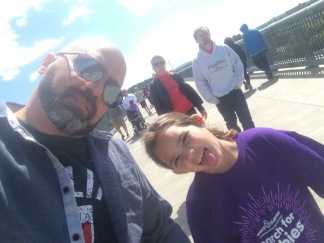 We talked along the way, enjoyed the sights and the people watching. Grabbed an iced tea on the other side of the Walkway and headed back.

Upon our return, we were greeted at the festival with music and entertainment…and food! Lots of food. As we stood in line for some delicious barbecued beef, I told Maria that I was proud of her and just for kicks, I grabbed my phone and went to my March of Dimes fundraising page one last time. As the page loaded, I couldn’t believe my eyes- which actually started to get a little bit misty. 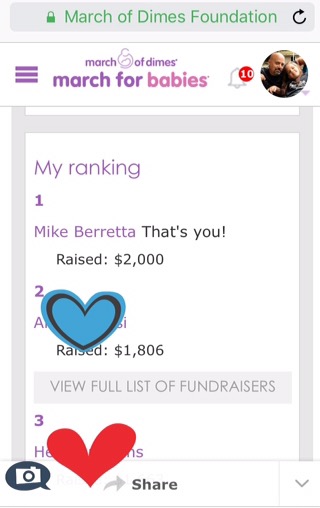 We were at exactly $2,000 and we were the number one online fundraisers for the event.

Apparently my calculations were perfect.

Thank you to all who supported us and wished us well in our mission-and please “save the babies.”